Why You Need This: Today you'll find out how to "Easily Drive It Farther with This Left Shoulder Trick"

You're going to find out why trying to pull the club head through impact to create distance will leave you frustrated and, most likely, hitting a weak fade.

How would you like to gain 10, 15, even 20 yards off your drives with a very simple trick?

One of the misconceptions I had for a long time is that if I’m going to hit this driver well, I’m going to hit it right down the middle of the fairway, I need to pull the driver through the golf ball.

Why wouldn’t I want to do that? The fairway’s straight ahead, I want my golf ball to go that way, shouldn’t I be pulling the club through the golf ball in a straight line toward the target?

That’s what I thought. It actually cost me a lot of distance. Now you may be doing this if you’re getting weak shots that kind of fade off to the right.

You feel like you’re swinging hard, and not getting a lot of club head speed. That pulling action is going to cause this face to open up and lose a lot of distance.

When you do draw the ball, it ends up being a snap hook, and we’ll talk about why that is here in a second.

But first let me go ahead and demonstrate one of these ideas where I’m going to pull that club through the golf ball, and it’s going to end up in kind of a weak, blocked-out to the right type shot, that’s really not going to be very good.

So there, I lost a ton of distance, I didn’t get the speed that I wanted, the ball faded off, I ended up hitting it in the water. Not very good.

So let’s talk about the right way to do this, and one very simple trick that can make this happen.

All right, so first let’s get into why pulling through the golf ball is not a very good idea. The reason is, if you think about how you pull this club.

If I’m going to go ahead and pull this handle forward, where does the club actually go? It wants to lag back behind. So the harder I pull, the more my club works back this way.

The reason is, if I’m putting force in this handle going toward the target, the club head or the center of mass of that club wants to line up with it. So the club’s wanting to do this and actually kick backwards like that.

At the same time when that happens, you may notice how the club face actually opens up a little bit.

If I just pull it straight ahead, the club face kind of opens as it rises. That’s going to be that weak shot that kind of falls out to the right.

Now the opposite of this would be what if instead of pulling ahead, I have a little bit of lag in this golf club, and I actually pull up?

Well now all of a sudden that’s going to get the club to whip on through. So I’m not actually dragging this club forward, I’m just pulling this handle straight up and it’s getting that club to really whip on through there.

That’s what’s called a moment of force, and it creates a moment arm that creates the whip of the golf club.

If I’m doing this with the club coming from the inside, or kind of lagging in behind or in the slot as a lot of people call that, now I can pull up and through and get that club to really whip around, it actually wants the face to square on up.

It makes it easier for the face to close down and square up through the golf shot. That idea of pulling the handle straight ahead ends up leaving the club wanting to come behind me, the face to open up, and now all of a sudden I hit those weak blocks to the right.

Again, let me show you that, and this time I’m really going to exaggerate pulling the handle ahead. You’ll see how that face opens, and again, that’s going to kind of end up in that week shot that went out to the right.

Again, another one in the water. Although I’m not trying to kill those, you can see how that’s really not getting much on it.

So what’s the right way to do it? Let me walk you through it step by step here.

First, we want to get the club which is in the slot, or coming in a little bit from behind us. So what that means is I want to feel like this club head actually is behind my body.

As I’m starting down, the club, for me, feels like it’s falling behind my body this way. I’m letting gravity, I’m letting the momentum of the club fall this way at first.

Then as I turn through the shot, what’s going to help me to actually whip this club through there is focusing on my left shoulder. This is the trick that I want you guys to do.

As you get that club to feel like it falls in, now your left shoulder’s in front of your body, it’s on this side of your body toward the golf ball.

Imagine a swing plane here, my shoulder’s going back up and around that swing plane and since my club’s from the inside, it’s really going to whip on through there.

Notice how all I’m feeling like as I’m turning on through, my club is whipping on out, it’s actually coming inside out promoting a little bit of a draw.

If I have that one simple trick, I feel like I focus in on this left shoulder, and I turn it once I get that club dropped to the inside, I turn it up and around as hard as I can, you’re going to result with some nice draws, some really powerful shots. Man, you’re going to have a lot of fun driving it farther.

Now we don’t want to stop here. Really what I’m talking about in this video is getting the club to work so that I can get a Straight-Line Release.

As I turn my shoulder back up and in, and I really focus on that whipping back up and in, that’s going to allow my body to open up to where I’m releasing out in front of the golf ball.

If you can imagine, this is the golf ball I’m hitting, I’m pointing everything. I’m releasing everything to that four feet in front.

So if I throw another golf ball out there the direction I’m trying to release, what’s happening here is my shoulder’s back, and then as it turns up, my club’s lagging behind, and my body gets facing out there to that golf ball.

This left shoulder really helps with that, but if you want to ingrain that, you want to make it to where it’s second nature, you don’t even have to think about it at all, you just grab a club and you do it, that’s when you want to work through the Straight-Line Release in the top Speed Golf System.

Then go to level 2, level 3, that’s going to fully ingrain that once you get through level 3, you’re never going to have to think about it again.

You’re always going to be releasing that club out in front, you’re going to have a blast playing golf. Let’s go ahead and get started, I’ll see you in the Straight-Line Release.

You Will Never Hit Your Driver The Same Again | 3 5’s DrillPublished: Nov 14th Get Access Now! 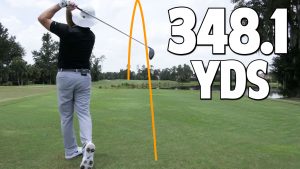