Why You Need This: In this video, you get a driver lag tip for max distance.

You'll get a close look at how you should release your lag at contact.

Pros make contact with a spine angle that's facing more away from the target.

They do this to launch the ball higher, which helps them get more distance.

What's interesting is when you consider forward shaft lean.

Hitting with good forward shaft lean delofts the club (around 20 degrees for pros).

If you're swinging with a 9 degree driver, that leaves very little loft on the clubface.

Since you want more distance (like the pros), you'll need to increase your spine angle away from the ball in order to launch the ball higher.

Watch this video now to get a great lag tip and crush your driver like the pros!

Hey guys, great to have you here today. Today we’re going to talk about two tips absolutely crush your driver. One of the questions I get all the time, I get asked this almost on a daily basis, is how much lag should we have with the driver?

We know if we’re using an iron, for example, let’s imagine that we’re going to hit an iron off the ground. We’re going to get some lag, and then we’re going to have forward shaft lean and really compress that golf ball.

I’m coming in with some lag, I’m having forward shaft lean. Typically, pros are going to deloft their irons about 30 percent of the natural loft.

So let’s say that your 6 iron has around 32° of loft. They’re going to deloft that down to around 20°-21°, somewhere around there, at impact.

As we start to get to lower and lower lofted clubs, we’re really not delofting them as much. I get a good question all the time about the driver, is should I be delofting the driver at all? Should I have any forward shaft lean?

If I’m swinging, for example, here I have an 8° driver, probably could use a 9°, this is a little bit older than the newer ones tend to launch a little lower, lower spin.

If I’m going to do that, I can’t really take all the loft off this driver. So we’re going to talk about today what’s the difference between lag and forward shaft lean, then when we’re going to be getting rid of this with the driver.

One of the keys to our Top Speed Golf System, and this actually crucial. I’ve studied a lot of amateur golf swings, or mid to high handicap golf swings I should say, there’s a lot of good amateur players out there.

If you look at the Tour players, on average their spine angle is going to be tilted away. The way that I measure this I go from the middle of the hips, if you’re filming from face on, I find the center point of the hips just from the camera angle, not using the belt buckle or anything like that.

I’m just finding the middle of the hips, and I’m measuring up to the top of the shirt buttons, or the middle of your sternum as you’re at impact.

What I’ve found from Tour players is the average is like 20.86, just about 20° tilted away. Meaning that their upper body is tilted away from the target.

This is going to allow them to swing either level or slightly up on the ball, and then thing is here, when we think about forward shaft lean a lot of times, we’re thinking about it as me being over top of the ball, and hitting down.

So if you look at my spine angle, if it’s straight up and down and I have let’s say 20° of forward shaft lean, as I get tilted away, well now I’m swinging level.

What we call our compression line is our left ankle, our left hip, our left shoulder need to be slightly tilted away at impact with a driver.

Our spine needs to be tilted away with the driver, and then that’s going to put us in a position where we can rotate through that shot really well. We can get a lot of speed.

We can also get some lag in the downswing. We’re letting go of that lag mostly as we get to contact, so that shaft is going to be pretty much straight up and down, then we’re still getting that same straight-line release point out in front.

If you look at it, this driver is 45° in front, now that club is splitting my forearms. So even with a driver, I’m getting a bunch of lag. On the way to releasing that lag, and I’m releasing it on out in front.

I have some forward shaft lean at impact in relationship to my body, because it’s still releasing out in front in that direction. But if you’re looking at it from the ground standpoint, or from the ball standpoint, that driver shaft’s pretty much going to be straight up and down.

We want to get tons of lag, we want to release it to the exact same straight-line release point that we do with an iron shot.

Whether it’s a pitching wedge or a driver, we’re going to be going all the way out there to release the club. The only difference is, we’re releasing it a little bit earlier with the driver to allow it to still have a good amount of loft.

We are releasing the driver a little bit earlier, and that’s the only difference there. Most of the time I’ve found that you won’t even have to think about that.

You’re just going up here and swinging, you’re going to release that forward shaft lean naturally, and all I want to focus on is making sure that I’m tilted back, making that I get good lag and that I release it to my straight-line release point.

If I can get those three things correct, then the driver is going to take care of itself. We’re going to be able to rip the ball.

There we go. Hit that one nice and straight, right down the middle. I show you one of those in slow motion so you can see the angles of the wrist and how that releases.

NSA14. How To Create Lag In The Golf Swing | Effortless PowerPublished: Jan 30th Get Access Now!

L046. This Lag Drill Will FINALLY Get You That EFFORTLESS Power In Your Golf SwingPublished: Jan 11th Get Access Now! 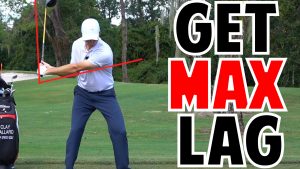