Why You Need This: And I have a question for you? "Do You Swing with Your Left Hand or Right Hand"?

If you're like most players, your right hand tends to take over like a ruthless golf swing dictator!

But when you try to use the left hand you feel weak.

So what exactly are you supposed to do?

In this video you'll discover precisely when and how to use the right hand so you can feel strong and powerful in your swing.
(without the flipping, casting, pushing, or jerking)

And you'll discover exactly how and when to use your left hand (which isn't as strong) to get tons of speed, without tons of muscle.

Teaser:  It has to do with the left shoulder.

Don't miss this video, or your hands may continue fighting each other forever.

I bet you’ve wondered which arm should be powering the golf swing? I mean I’ve a right-handed player, I’ve played baseball, I’ve thrown things, shouldn’t I just be taking this golf club and throwing it at the golf ball with my right hand?

But then you hear videos where it talks about actually turning your left shoulder up and in, getting this club to whip on through, really feeling like your hand comes up and in through contact.

Well, that’s not really a right arm motion, I can’t really take my right arm and move it up and in, that doesn’t make sense. That’s really more of a left-hand motion.

Let me go ahead and give one a rip to get started, and let’s dive into this whole right hand/left hand debate.

All right, so as I mentioned, there’s proponents out there that would recommend the golf swing as a right-hand motion. That is correct, it’s actually both arms.

They’re working at different points, and the cool thing about this is once you get the overall idea down, your brain can actually internalize this to where you don’t have to think about it and you’re generating this speed without even realizing you’re doing this.

This is one of the reasons that if you ask really good players, at anything, not only golf but any sport, people that are really truly experts in performance, a lot of times when you ask them what they do, they have no idea.

They give you some off the wall, crazy advice because they can’t consciously understand what they’re doing.

I want you to get there, and when you go through these drills, we’re going to be one step closer to getting there at the end of this video.

If you’re playing ball sports, if you’ve normally been throwing a baseball, throwing a football, whatever it is, that’s when the right hand is going to be on there.

I want to make sure that as I start down my elbow is leading the way. I don’t want this elbow to get out, and I start casting it. You see my elbow turns out, I cast the club, we don’t want that.

I want my elbow leading in toward my hip, and I’m putting this club down. Then from there, I’m going to feel like, the sensation that I have here, is that this club is lagging behind yet I’m throwing it at the golf ball.

Now most of the power is happening in this part of the swing with the right arm. It’s from the start down, again that elbow leads so I don’t cast.

Then I’m adding power as I’m coming through there. I’m going to feel like, just like we talk about in the Straight-Line Release, I’m releasing that club to the 45° in front.

As I start that lag I pull down with the right arm, and I’m letting it release out here. That’s allowing me to get lag, that’s allowing that club to whip on through and get more club head speed.

What I want you to do to make this happen is first to start out with just your right arm only, and let’s make some practice swings just like we’re hitting a baseball here.

I’m opening my body, and then I’m going to let that club whip on through. What’s going to happen there as I’m coming through contact is that club is releasing, it’s lagging and releasing.

It doesn’t get fully release to where it’s in a straight line with my arm until 45° in front.

That’s naturally going to happen with a baseball swing. People just do that, and they don’t even have to worry about it. All we’re doing with that baseball swing now, is we’re turning it down toward the golf ball.

We’re doing that same thing with the right arm. Again, letting the elbow lead, releasing the club out in front, that’s when the speed comes from the right hand.

Now what’s interesting, is because this club’s releasing so fast, if you look at the angle of the handle here, that club is releasing and my hand, my right hand, is on the bottom of that club.

As that club releases in the golf swing, my right hand can’t even keep up with that, or it has a tough time adding any power down here through contact because the angle of the club is releasing so fast.

So feeling like you’re pushing it through with the right hand, pushing that club toward the target is not a good thought. Again, I’m throwing it and letting it go.

As it releases down here, all the momentum is going in front, and my right hand can’t even keep up.

That’s what you’ll see players like VJ Singh, or Phil Mickelson, a lot of times they’ll actually have the right hand come off the club in the release, you’ll see that sometimes. That’s that letting go.

That’s the correct way to do it with the right arm, it adds speed at the top, it throws the club and it lets the club whip on through there. It doesn’t push the club coming through contact.

If I feel like I’m throwing that golf club, that can allow me to get a lot of club head speed still feeling fairly effortless. Let’s go ahead and give that a try, that idea of me throwing the golf club here.

There we go, killed that one. I’m not going to hit one much better than that. That’s to me feeling like I dropped the elbow in, I released the club in front, and I’m not pushing it through impact.

Now the left arm happens more through contact. It’s not all that powerful back here at the start of the swing.

It’s going to be adding a little bit of power, getting the club to kind of work down this arc, but it’s not creating that powerful throwing action of the right arm.

What happens with the left arm is as you come through contact this left hand moves up and in, my shoulder, my hand, my hips, everything’s moving up and in, and that aids in me whipping the club through contact.

That’s what’s called a moment arm. So when this club lags behind, if I can take this grip and I could pull straight up with it, that whips the club on through.

If I feel like I do that with my left hand, my left hand pulls back up and in, that whips the club on through and that can help to really get some fast speeds into the golf club.

Now that’s going to aid in there, and again, all I’m doing is I’m taking my left arm only and I’m making some practice swings with that.

Here I’m not thinking about throwing down and starting from the top, that was the right arm’s job. Here I’m thinking about once I get close to contact, my legs are bent, my body’s loaded up, and then I’m going to turn my body up and in.

My left hip, my left shoulder, and my hand all come up and in to allow this club to whip on through. The cool thing about this is, it pairs up perfectly with getting lag and getting the club to slot from the inside.

Because now there’s big angle, the more I pull up and in, the more that club whips on through contact. So take another five practice swings, go ahead focus on the whip through contact with the left hand.

I like to feel like these bottom three fingers are doing all the work here, and I’m just releasing that club out in front. That would look something like that, and I can get a pretty decent amount of club head speed when I focus on the left arm only.

As you get more comfortable with that, the cool thing is, I don’t even have to think about what my right and left arm are doing.

It’s just going to happen as you swing. So let’s go ahead and try now. I’m going to feel like I just make a powerful swing, and you can see some of the proponents of what I was talking about happen.

There we go, another really long one. Hit that one very well. So, do those drills right arm only, left arm only, your brain will naturally put those together after you get those reps in. 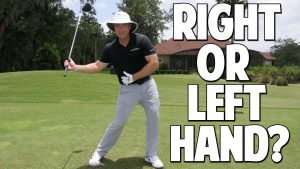