Why You Need This: Today, you'll discover "Do This Move and It Becomes Impossible to Pull Your Irons"

Have you ever had a great round going, then you step up to an “uncomfortable” shot…

…and you pull it hard, just killing your round?!

Today, I’ll show you how to eliminate the “pull side” of the course entirely…

…so you can finally stop those round-killing shots once and for all!

So you've got a great round going, maybe a lot better than you're used to. You feel in pretty good range when good, everything's going good. Then you get up to your hole and you got a little bit of an uncomfortable shot. And you know you want to save your round. Then you end up kind of doing something like this.

Hit it real solid, but you end up just pulling it like crazy and it cost you. Maybe it goes out of bounds, maybe goes into a water, maybe it puts you in an impossible place to get up and down. But regardless of the situation that more times than nothing that pulled shot is what takes players out of their round and then they end up trying to compensate the entire time.

Well, what I want to go over today is how we can eliminate the pull side of our course of the course with two very simple keys, and that is making sure that when we are uncomfortable under a shot, we know for sure that that ball isn't going to go to our pull side. So the first big key when we're talking about this is we understand the acceleration profile of the club.

If we tend to and I'm going to over exaggerate a little bit because as you know, if you followed me, followed me on course, we go for very long. We know that I like to explain things in extremes, make things very, very clear. If I start slowing down my club very, very soon, that clubhead is going to want to turn over very, very quickly.

Then at the last second, we're going to get that swoosh sound so you can take some swings above the ground where you hear the swoosh sound on the front side of the ball. That's going to be the first key, is getting that club to speed up later in the swing. A lot of players sense this happening more after the ball.

That's kind of the feel isn't actually how it really happens, but that's a sensation by feeling that and getting the sense of speeding up later in the swing, you're going to get your acceleration profile to air on the side of the Clubface being slightly open. No matter what kind of swing you're making, it's going to be slightly open to where where you are on the downswing.

If I swing in and out, I can hook the ball. Well, not if we are accelerating through the ball properly. We have that swoosh sound, so we're going to be able to start the ball online. And if anything, it's going to air falling a little bit to our right. So if we draw a plane line that's going to be up through the course of the club, up to the base of the base of the elbow, we know that if this club head gets underneath this plane, then we can come in and hit this ball squarely.

If the clubhead gets over the plane, that's going to make it very hard to speed up through impact because you're going to want to throw the club from over the plane. It's just the propensity that we're going to have. So if we can pair up getting this club hit underneath the plane with getting the speed after the ball, we can effectively eliminate the left side of the course.

So let's try some out here. So all I'm going to be worried about here is making sure that I get this club to shallow out and I'm going to get my sensation of feeling like I'm speeding up just after impact so see, they're not the greatest shot, but I eliminated that poor shot. So if we look at what we have here, start off straight at my target, then kind of fell to the right now maybe a little bit more than I want to.

But remember, what we're talking about here is an uncomfortable situation. Maybe we have a situation here where there's water left and now that puts me on the right fringe or maybe 20, 30 feet from the hole, depending on my shot. But I know if I'm aimed there and I know if I execute these two things, I'm never going to miss it left.

So I'm going to do this one more time again and again. This is just guaranteeing, making sure that I'm going to have a ball. It starts off decently straight and never falls or goes too far to the left.

So that one struck pretty good. That one's going to be a little bit better. But again, all my success here is making sure that I am missing just right of that target line. So again, my only keys there and this is a just an absolute must on the golf course. If I have something where I have to miss left, I'm going to make sure that I get under this plane and that I speed up feeling like it's happening after the ball now.

There we go. So I am allowing this club to shallow out underneath the plane. I'm using my acceleration profile to allow that to make sure that I do not miss it on the left side of my target line. Now, it's very important to make sure that when we are executing this move, when we're executing these two things, that we're not leaving the clubface too far open.

This is the number one mistake you'll make when you start shallowing out the club and accelerating is you'll want to leave it way open and then you definitely won't miss the left side of the course. You'll miss that way, right? So we need to make sure that we are squaring up the club properly when we shallow out underneath the plane line.

So squaring up the club under the plane and then accelerating through is what's going to guarantee us losing the left side of the course, eliminating the left side of the course, but also guaranteeing that our shot just like these starts off on target and just falls a little bit to the right. So what I'm going to have you do now is I'm going to have you head over to the move section.

So if you go ahead and click the instruction tab at the top of the screen and go ahead and go down to the TSG system and go to the move, I'm going to have you check out the tennis racket drill, which is where our owner, head instructor Clay Ballard, goes over exactly how to shallow this club out and square it up.

So if when you get the move down, you can utilize being underneath the plane and then that acceleration feeling that swoosh after impact to allow that ball to fall to the right. So let's make sure you check out the move, pair that up with this, eliminate the left side of the course and we'll see you here in the next lesson.

C105. Untaught Secret to Stay in Your Posture in The Golf SwingPublished: Jun 27th Get Access Now! 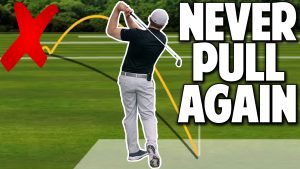