Why You Need This: Today, you'll discover "Clearing The Hips In The Golf Swing | Missing Piece"

There’s a couple of huge moves in the golf swing…

...that’ll really separate the good players from the ones who struggle.

One of those moves is clearing your hips…

...which a lot of players think they’re doing correctly…

...but, chances are, you’ve probably never been taught the right way to do this.

I’ve got a great drill today that’ll turn your belt into a “steering wheel”...

...so that you can learn to clear your hips the correct way…

...and get you on the path to playing powerful and consistent golf!

Michael Derr: Forward shaft lean is a must have if we’re going to want to play consistent, powerful golf.

If we’re going to want to clear the hips, compress the ball, and release it out in front like all the touring pros do, we have to have that base mechanic of clearing the hips.

When you’re working on this at the range, and you start firing your hips and they stop and then the club passes, and flips, and you think you’re clearing your hips, and you’re doing it as hard as you can, or you even try to do it slow, and it stops and it flips, you might even stand up out of posture.

All these things can kind of happen, and we’re kind of wondering what’s going on?

Well, I have a really great drill for you that’s not only going to show you the exact mechanics of how we swing with the hips in synch with the club, but it’s also going to be a great field drill that you can use on the golf course.

That’s going to help you synch up the club through impact, so that you can compress it and release it out in front.

How this drill works, is we’re going to imagine that, well you’re going to use your belt line. You can imagine a belt around you.

Even if you’re not wearing one, imagine a belt around your waist and what we’re going to do is in our mind, we’re going to turn this belt into a steering wheel.

So if the belt is a steering wheel, and I’m just standing straight up and down, that would me be driving straight.

That’s the move you’re already really good at, you know to turn your hips and fire the hips, but what’s the missing piece? The missing piece is what are we doing with the club in relationship to the hips?

When you’re working on this, and you come up and you fire the hips and you have no idea where the club is, that’s the number one thing that’s going to cause you to stop, flip, and even stand up out of posture when you’re going into impact.

So what I’m going to have you do is go up to the top of your swing, and when you come down, I want you to pause when you’re about parallel to the ground.

From here, I’m going to have you take a steel rod from the butt end of the club, and I want you to attach it to your steering wheel.

So in your mind, there’s a steel rod and this is welded on. It cannot move unless the steering wheel moves.

Where you’re making the mistake, is you’re ripping the steering wheel off of the club and now the club can’t move. Now you’re going to have to use your hands to try to play catch up.

That’s our visual. That’s how the mechanics work of how we get forward shaft lean and then release it out in front.

How we start applying this is first I want you to take some dry swings where you go up to the top of your swing just like we did right here.

Attach that butt end of the club to your steering wheel, and start getting a sensation for when you’re turning that steering wheel to the left, that’s what’s moving the club back and forth.

Go ahead and brush the turf, turn it back and forth, and that’s what’s moving the club. If I’m doing this incorrectly, we’re going to notice the club head pass the hands.

It’s not going to move because it’s a steel rod attached to there. That’s the feel we’re going to use when we start hitting some shots.

We know that the steering wheel’s going to move the club head to the ball, so I want you to start off with some easy shots where you take the club just about halfway back.

Move the steering wheel through, and just hit some little chips just like that where you’re actually utilizing this visual to move the club head into the ball.

Once you get a good feel for that, you’ll probably start hitting some really sharp shots because this is what allows us to get that compression on the ball.

When we are moving with the club, we can keep the hands out in front which allows us to get the forward shaft lean or stability of the face through impact. Again, when we start adding speed, it will automatically release out in front beautifully.

Once you get really comfortable with that, what I want you to do is start taking some bigger swings, just gradually bigger, but as you get to the top of your swing when the hands get about over parallel, then you’re going to allow them to get parallel.

When you get to the club parallel position, I want you to almost feel like you’re driving straight in front of you.

If you have the camera set in front of you, if you’re driving straight your steering wheel is pointing straight.

Then from here, that’s when you’re going to turn it through. So you’re going to almost time it to where the club’s parallel to the ground. Then we’re kind of attaching the rod to the belt and turning through.

Now with that visual, I am imagining that once that club gets about parallel to the ground, it’s attached and now these hips are going to fire open.

It’s going to clear and everything because I’m moving the club head into the ball with my hips and now we have a very easy visual to see how that works, now we can get that compression and release it out in front.

Once we get a pretty good feel for like an easy full swing, then you can start taking some rips at it and start bombing it, because now you can clear the hips in synch with the full swing.

Now there we go. Again, my feel on that full swing was this was attached like that steel rod and I was turning that steering wheel through. But because of the speed, that club head’s going to automatically release out in front.

This is just the first piece. The second piece, is making sure that we’re coming from the right angle, and we’re actually squaring up the club head.

That means we’re making sure we’re shallowing out the club head, and squaring up the club with clearing the hips.

If we pair all these moves together, you’re going to be compressing the ball like you never have before.

You’re going to be curing the ball with forward shaft lean like you never have before.

C109. How To Stay In Posture And Hit It Pure Every Time Using This Simple DrillPublished: Oct 20th Get Access Now!

C108. The #1 Reason You Don’t Stay Down Through Impact | So Easy To FixPublished: Oct 3rd Get Access Now! 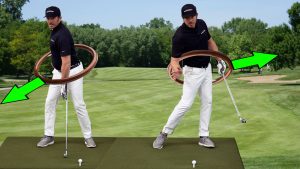