Why You Need This: In this video, "Bunker Shot Made Easy | Jason Day Bunker Analysis"...

Here's what's covered in this video...

Watch this video now to hit great shots out of the bunker like Jason Day!

Attention Top Speed Golf All Access members: In the video, I mention a few additional videos to check out. Here are links to those videos...

All right, so today we’re going to take a look at Jason Day in a bunker. He’s hitting a bunker shot here, and I’ve got two tips for those of you who find yourself maybe behind a steep lip.

We can see that there’s a steep grassy hill here. He’s got to pop it up over that and get it to land softly on the green. I’ve got a couple of quick tips for you guys on this.

Number one, we’ve got to shallow out your angle of attack if you’re coming in with a bunker like this. You really want to open up the face, you want to smack the sand pretty good and hard, but we want to have kind of a flat shaft angle as you’re coming in.

So as this club comes down into the sand, we’re going to see that right before it hits the sand, look at the club face there, almost completely open.

This is the number one mistake that I see with people that are poor players out of the sand, is that their face isn’t open enough.

If the face is open the sole of the club is now going to slide through the sand instead of digging down into the sand. So we’ve got to have as you set up to the ball, actually take your grip with that club face wide open.

The third thing you can work on here is we want to hit a good three or four inches behind the ball. We can see his club’s already shot down into the sand, it’s well behind the golf ball, and that ball, that club’s going to slide through and underneath the golf ball.

We can see that his divot started here, I went through all the way about a foot in front and it’s this nice, shallow kind of thumping action on the sand. You can especially see just how open his face is, actually pointing a little bit backwards as he’s coming through this sand shot.

So that’s going to allow that ball to launch up just completely vertically like this. So we’re going to take those keys, make sure that you follow those, get a little extra knee bend, open up the face wide open as you take your grip.

Make sure that you hit nice and behind the ball, three or four inches behind the ball. Let the club slide underneath the ball completely, grab the sand, and feel like the face is nice and open as you’re coming through. Take a big aggressive cut.

We can see that he’s swinging pretty hard at this, notice this explosion of sand. We really want to take a swing to where we’re going to hit a clean shot here, this would be a 70 or 80-yard shot with the sand wedge. We’re going to take a nice, big, aggressive cut at it.

So good luck to you guys, go ahead and thump those bunker shots. Swing hard, follow these tips, and you’re going to be a pro out of the bunkers. I’ll see you guys soon.

All right, so hope you guys really enjoyed this video.

For those of you that are members out there, one of the best times that we’re going to be able to find our self in a bunker and it’s actually an advantage, is when we’re driving on par 5s in two, or hitting our second shot on par 5s in two into the greenside bunker.

Now you’ve got a good chance to get up and down for a birdie. Or maybe you get really long and you’re driving the par 4s right beside the green, and you’re finding yourself with an event where you can get up and down and make a birdie out of the sand in a par 4.

It’s going to help you to retain that angle of lag very late in the downswing, and then really rip through that shot to create a lot of speed.

The second video’s going to be 3.2, so level 3, video 2, and we’re going to talk about the stretch-shortening cycle and how you can use your muscles properly in the golf swing to really let that club whip through contact and again, watch these videos.

They’re going to help you to increase your club head speed. You’re going to get it on those par 4s and get to the par 5s in two, get in those greenside bunkers. Now that you can get out of the bunker, you’re going to be feeling good and making some birdies.

So good luck to you guys, watch those videos, and I’ll see you all very soon. 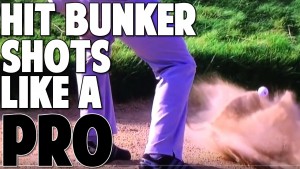