Why You Need This: Today you'll get a "Bunker Lesson | Open Face vs Closed Face"

Do you struggle out of the bunker?

Have you ever wondered how it is that the pros making bunker shots look so easy?

In today's video, I'm going to give you three secrets that will make your life a lot easier when it comes to hitting out of the bunkers.

After this video, you won't be dreading hitting the green side bunker anymore.

One of the most common complaints that I get when I’m working with players that struggle out of the bunkers, they say, “I would love to set up with my face open, but I’m just not comfortable doing that. I feel like when I do that, I just can’t get anything out of the bunker, I always end up way too short. What do I do?”

Then they’ll come, and they’ll fight it, and they’ll set up with their face square. Then they’ll blast it way over the green, or they’ll leave it short in the bunker. How does any of this make sense?

Let me go through and talk to you about exactly what happens, and why you cannot, absolutely cannot, keep the face square in the bunker if you want to be a great bunker player.

So let’s go through first here, imagine this face of this wedge, let’s talk about why if this is the surface level of the bunker, why we don’t want to have this face square. It has to be open like this.

Well if I’m swinging down into this water, and my face is square, look at what’s going to grab that water. What’s going to happen to this club?

Now I have to be really precise if I’m doing this. If the golf ball is here, if I hit a little too close to that golf ball with a square face, and I swing hard enough to get out of this bunker, that ball is going to soar 50, 60 feet over the green.

If I hit it just the perfect amount behind it, which if you’re using a square face and you’re getting good results, it’s probably what you’re doing. You’re just timing it up perfect, you get a pretty good result.

If I go a little too far back, now as that club shoots down into the surface of the water, or the bunker, or the sand, it’s going to eat up all kinds of sand before it ever gets to the ball, and it’s just not going to go out at all.

If I’m a little too close to the ball, let’s go ahead and try one out here. I’m going to set up with a square face. I have a line so we can see where my club’s going to enter relative to where this ball is set up.

I’m going to go ahead and try to hit about two or three inches behind this golf ball with the swing speed that I need to hit it out of here.

So that was actually not that bad. Flew over the green, but you can see I actually was fairly precise in where I wanted to hit that.

There we go, so that time instead of being the three inches behind, I was about six inches behind. So I got what most people would recommend to do. Look how much sand that took up.

That’s because my club face shot down in the sand, the ball didn’t go anywhere, barely got out of the bunker, now I’m going to have to hit another wedge shot.

So whenever I’m hitting these bunkers shot with a square face, I’ve only got about an inch area in there that I can deliver the club to where it’s going to shoot down in the sand still hit enough ball to get it to go the right distance. It’s just impossible to time, there’s no way to do it.

Now if I open this face, look at what’s addressing the surface of the water now. This other piece of metal, this flange on the bottom of the club, imagine as I’m swinging down to that, that’s helping keep this kind of gliding across the surface, not digging in too much.

I can hit six inches behind, it just glides. I can hit two inches behind, and because the face is so open, it just goes up in the air and it doesn’t shoot way over the green. I can be anywhere back here, and do pretty well.

If I hit a little too close it may go too far, but it’s not going to be crazy. So here, let me try to hit a little closer to this golf ball.

There we go, I really hit closer to that one, it’s still barely off the green, and again, I was three inches behind the golf ball.

So on that one, maybe not the perfect shot, the perfect result, but I’m still about 20 feet closer than I was with the square face.

Now let me go ahead and hit way behind one here, and because that flange is open it’s going to glide through the sand, and let’s see where this one ends up.

There we go, so perfect on that one. Just barely past the flag. A little bit farther back, let me go a little farther back than that. Let me really hit behind it to show you how far behind you can hit and still have a good shot.

There you go, great example there. This is a tough shot I’ve got. I purposefully picked a 40, 50-footer. See there, I’m entering the sand six inches behind that golf ball.

Because this bottom flange helped it to glide through, I’m still on the green with a pretty decent putt for this type of a bunker shot.

When you have the face square, it digs. Another way to this about this, which I think is a really good analogy that I just heard, is imagine this leading edge of the club and the face of the club like water skis.

If I’m skiing along, and my skis are kind of pointing up and gliding across the surface of the water, that would be like an open-face wedge. Everything just glides right along.

But as soon as the front of my skis tip over and catch the water, I’m going to be eating a face full of water. As soon as my skis penetrate the top surface level of the water, I’m shooting down in there.

Same thing’s happening with your wedge shot here. As soon as I let that face start to square up at all, it’s going to be really tough. I’m going to either leave it in the bunker, or I’m going to hit it way, way too long.

Now the final thing I want to leave you with here, the big mistake that players make whenever they do open up the face and they say OK, I get the idea but I’m still not getting the result. We have to swing incredibly hard.

I have my 60° wedge here, you could use a 56°, either one of those is fine, but I want to have that face wide open here, and I’m going to swing with the amount of speed I would of just basically a full swing.

I want to feel like I’m really hitting the back of the club, you know popping that against the sand as I’m swinging down. I’m going to let this flange keep it nice and shallow.

Last thing I want to do is barely touch any sand. I want to really thump that sand hard.

So finally here, let’s go ahead and hit one more. Again, this is a tough bunker shot, 40, 50 feet. One of the toughest in the game.

I’m going to open it wide open, I’m going to swing really hard, and I’m going to thump the sand behind the golf ball. There we go. Almost made that one.

So the key to bunker shots, two things. Got to have that face open. Nobody’s ever been a great bunker player without a wide-open face.

You won’t see a single guy on the PGA Tour that’s face doesn’t look like this in the bunker. Number two, you’ve got to swing hard, way harder than you think.

Number three, don’t try to pick that ball. Thump that sand, hit down into it hard, let the flange allow that club to glide through the bunker. You’re going to get out every single time. You’re going to look like a pro out of the sand.

All right, so where do we go from here?

We talked a lot about how to get out of this bunker, made a lot easier, now that we can swing hard with the face open, we know it’s going to be pretty simple just to get it out on the green and do well with that.

But what about our wedge shots? What I recommend you doing, is going to the Top Speed Golf System, go into The Wedge section and working through those videos.

You know it’s not about just hitting out of the bunker, that sounds like a pain point for most players, but I bet you’d like it if you can get up and down two, three, maybe even four times more per round and save those handful of shots. Lower your handicap by a few strokes.

Work through that System. Start from the very first video in The Wedge system, and then work step by step.

As you compound each of those videos, you’re going to get more comfortable with your short game. Add that to what we learned here today about the bunker, and you’re going to feel great.

Best of luck, and I’ll see you in The Wedge system. 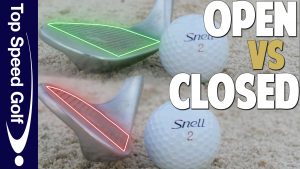