Why You Need This: In this video, you'll see a great Evnroll putter review.

This is one of the coolest putters I've ever used in my life.

The reason that it's so cool isn't the design (which is awesome)...

But rather it's the technology that's in the putter.

Here's what I'm excited about...

With your standard putter, if you mishit the ball a little, you'll get less distance than if you hit the ball on the sweet spot.

The Evnroll putter, on the other hand, produces a more consistent putt even with mishits.

It does that by adjusting the grooves on the putter face.

Now, this putter won't magically help you make long putts that are mishit, but it will help you minimize the effects of a mishit, and will help you get it closer to the hole — hopefully in the hole.

Watch this video now to get a cool Evnroll putter review!

All right, guys. Welcome back. I’ve got one of the coolest putters that I have ever seen in my life. This is called the Evnroll putter. Just came out last year, it’s designed by Guerin Rife, famous putter designer, and it’s really nice.

Now the reason this putter’s so cool isn’t because it has a milled head, isn’t that it’s a really cool design or shape, it isn’t the grip or anything like that, even though I like all those things. There’s multiple styles of this putter.

The really cool thing about this is the technology that’s in the face. So most putters when they have a flat metal face what’s going to happen is if you hit a putter dead center in the sweet spot, it’s going to make the ball go a little bit longer. It’s going to give it the maximum amount of energy transfer.

With this putter, he’s made some compensations to make this counteract that. So in the middle of this putter, there’s grooves but not only are there grooves, and I’ll show you some bonus pictures of this.

But in the dead center of the grooves are the deepest and thickest, which means it has the least amount of metal in the middle of the putter.

Now if you hit it off the toe, since there’s a little more metal on the toe, it transfers a little extra energy. It takes this ball that normally would be a little shorter and it makes it go a little farther, so now it’s the correct distance.

Same thing with the heel shot, it’s got a little more metal and makes it go a little farther. It also has something called a gear effect. So since those grooves are kind of angled out, it actually compensates and gets the ball to roll a little bit straighter on those mis-hit shots, which is very common.

Usually, the most common miss on a putter is just off the heel or the toe for really good golfers. So this makes a difference.

With this putter, no matter where you hit it on the face, it’s going to roll a bit more even. Now it’s not magic, it’s not going to make a 5-foot miss go in the hole, it’s not like that at all.

But it will adjust a couple of inches which over a decent-sized putt is a pretty good amount.

So this is an awesome putter. I like the design, really good quality head. They’ll give you custom length, they’ll kind of make it up however you want. You have multiple head designs to pick from. It’s really nice.

But the best thing about it is it actually makes you a better putter without having to change your stroke at all.

If you’re putting really well, what’s happening is, as your putter hits the ball, the grooves are going to catch the ball and if you’re rolling the ball correctly, it’s going to put a little top spin, so these grooves actually grab the ball and roll the ball forward very well.

If I miss this, I have no excuse. All right guys, get the Evnroll putter. Really cool, I highly recommend you check this out. The coolest technology I’ve seen in a long time for putters. 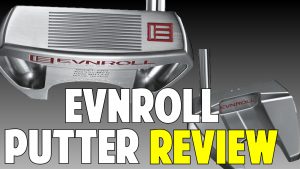