Why You Need This: In this video, "Backspin for Chip Shots"...

You'll learn how to hit great shots that check up next to the pin.

It's always cool to watch the top pros chip the ball from around 30 yards out.

The ball kicks once on the green then comes to a dead stop next to the pin.

That's the type of shot you'll learn in this video.

Watch now to put tons of backspin on your chip shots and make more birdies!

How many times have you been watching TV and been watching the PGA Tour, and you see them about 20 or 30 yards away from the green, and they hit that one shot that kicks once on the green and then stops dead in its track right beside the hole.

In this video we’re going to talk about how you can get that kind of spin to get your ball t stop by the hole, and start making more birdies. Let’s go ahead and get started.

All right, so there’s four factors that go into creating a lot of spin with your wedges. The first one is speed. We’ve got to create a lot of speed to be able to get more friction between the club and the ball. That’s going to get a lot more backspin on there.

As you go farther and farther out, let’s say you’re making a full swing with a pitching wedge all the way back to a 3 iron.

The harder you can swing, the more club head speed you can get, the more backspin you’re going to be able to create. Today we’re talking more of a little bit closer shots.

The next thing we’re going to do that really depends on how much spin you’re going to get is what’s called the spin wedge.

Basically what this means if I have a golf ball on the ground here, and I want to be swinging down and hitting this golf ball, my club is going to be coming slightly down and through the ball.

You can imagine the angle of attack that my club is moving down into contact for the ball is here, will be slightly down. We’re going to want that to be pretty shallow with all of our shots.

One thing that people do a lot of times to try to get more spin on the ball, is they put the ball way back in their stance, and they start to chop down on it even more.

Even though that will give you a more a negative angle of attack which is good, or which could be good to add spin, it’s also delofting the club face which is going to give you less spin.

So we want to always use when we’re trying to get the most spin possible, use our highest lofted club. In this case I have a 60° wedge.

Now you can imagine there’s 60° of loft on this club, I’m going to swinging down let’s say -5° into the ball, so I’m actually swinging down and through at a -5° angle of attack.

The bigger you can make that number, the more spin you’re going to get. If we change that from a 60° wedge which at impact the dynamic loft would be around 52° maybe.

If we change that to a 3 iron, or now the dynamic loft may only be 16° or 17°, that spin wedge is going from something like this, to way, way tighter, and that’s why you get a lot less spin with a 3 iron versus a 60° wedge.

That’s the second piece is the spin wedge, we want to get the biggest wedge we can, always use a high-lofted club. The third piece here is we’ve got to get friction.

We’ve got to get this ball to grab onto the face as we’re making contact. So anything that’s on your face that gets in the way of grabbing that golf ball and getting the grooves on the golf ball is going to give you less friction and you’re going to use a lot of spin.

Two things I recommend to always keep in your bag. We’ll really need this if we want to spin the ball back.

Keep a towel, I’ll keep one half of this wet, and I’ll get all the dirt, everything out of the grooves, and then we also want to keep one of these little wire brushes and get every piece of dirt or anything that’s in the grooves out of there, and have a perfectly clean face.

Any debris that’s between your ball and the face is going to massively cut back on the backspin, especially when we’re talking about water.

If the ground is wet, you make a couple practice swings, and now the club face is soaking wet. Go ahead and dry that off before you hit, because that will cut down on your backspin probably 50 percent or so, the ball’s just simply not going to check up.

Always have a perfectly clean golf club, clean grooves, and then you’re going to be ready to make the best contact that you can.

Last thing is going to be about hitting the ball dead center, square in the face. We’re not going to get into that in this video, that’s going to be more your overall swing and your capability.

That’s what we go into in the Top Speed Golf System. Now, let’s go ahead and give you a few key checkpoints.

I’m going to hit a few shots for you, demonstrate this, and we’ll see if we can get those balls to check up.

All right, so this is where the rubber meets the road, we’re actually going to hit a couple shots here. Let’s talk about a couple things you want to focus on when you’re actually making the motion itself.

As I mentioned before, one of the worst things you could do is put the ball way back in your stance. You’re going to chop down into this ball a little too steep.

Even though you’re lowering the angle of attack in your spin wedge, you’re also taking loft off the club face when you’re doing this. You’re really not increasing that gap.

That way as I’m coming down, I can clip the ball first and the bottom of my arc is going to be just in front of that, kind of on the inside of my left shoulder.

So I don’t want to play the ball way back in my stance. Also a lot of times what will happen is people will think that they need to really deloft it and kind of pinch the ball. You hear that a lot.

That may get you a little more spin, again if you hit it solid, get you some decent amount of spin, but I don’t want to deloft the club that much.

I don’t want to chop down and really pinch it like this, because it’s going to come out too low and too hot, and it won’t check up on the green.

I want to go ahead and be making contact with that ball and have a little bit of forward shaft lean, but again, I want to make sure that the maximum loft is on the club, I don’t want to be taking all that loft off there.

Then finally, as I’m coming through this ball, let’s imagine I’m going to hit this direction. I want to imagine I’m getting maximum friction on there.

As I make contact, I want to visualize that that ball is staying on this face as long as I can down and through the shot, that way I make sure that I really go through the shot and get that good, solid clean compression.

I don’t want to go ahead and start cutting across the ball which would be a glancing blow. I want to come down and through, as long as I can.

So if I put those things together, let’s go ahead and try a couple shots out here, and we’ll see if I can get one of these to kind of land on the front of the green just short of the hole, and then check up.

So I’ve got a couple balls here, again, I’m focusing on really coming down and through, extending through this ball to make sure that I get that good, solid contact and keep the ball on the face as long as I can.

There we go, that should have good spin. A little long, but you could see that one hop and then stops there. I’m going to go ahead and try another one out.

Again the same thing. I’m coming through, using the loft, and I’m driving and I’m feeling like I’m staying through that shot, and I want to feel like this ball stays on the face four or five inches past contact.

There we go, that one checked up right beside the hole. So keep the club coming through there, keep these grooves really, really clean. No water, no dirt, you’re going to start spinning the ball better. 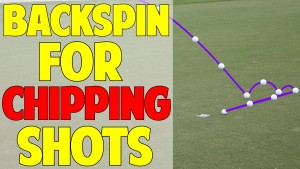