Why You Need This: Discover how to "Avoid These 3 Killer Moves in the Downswing"

If you struggle with a casting motion in the downswing…

…you most likely also struggle to create lag in your swing.

…that can be making it nearly impossible to make consistent contact…

…and very tough to create that lag you’ve been searching for.

Find out what those 3 moves are…

..and what you SHOULD be doing instead.

And FINALLY start making that pro-like contact with tons of lag!

Clay Ballard: All right, so what are the moves in the downswing that are going to allow me to hit it really consistent?

I’m going to talk about exactly why that plays such a big role, plus two other tips that are really going to help you in your downswing to hit some really solid shots, tons of lag, tons of club head speed.

All right, so let’s jump right into it. In this right wrist action, if you imagine I’m grabbing my club and I’m doing that right wrist action, all that’s doing is rotating the club around the shaft, but that’s a big deal in either creating or losing lag.

So as I go to the top of the swing, what I’ll see players wanting to do is from the top, we know we only have so much time to create speed in the downswing so most players want to fire on it right away.

Start getting this right wrist to push, and as you cast, everybody knows about this casting motion.

Everybody knows about kind of throwing that fishing rod, but the part that a lot of times is missed, is this type of motion, this flexion extension.

Whenever we cast this club, a lot of times that wrist is going to go into flexion where those knuckles are going to release too early.

What I feel like in my swing, and what I want you to feel like too, is as you start your downswing, your right wrist knuckles go back towards your elbow.

That’s going to take that club and drop it more shallow behind you, that’s going to get that club face a little bit more closed so it’s squared up early. That’s also going to resist that urge to hit with the right hand from the top.

So as you start your downswing, feel like those knuckles come back and that’s going to put you in a great position. So I’m going in my backswing, I start to feel that about here.

Then as I start down into what I call the max lag position, look how my knuckles are back, my elbow’s in. I’m in this really powerful spot here to where now all I’ve got to do is rotate through and I’m going to hit a great shot.

So that’s the very first piece there, feel like those knuckles get tighter to you rather than pushing it out away from the top.

We all know about the cast, but a lot of times we forget about the knuckles back and that will make all the difference in the world.

Let’s go ahead and try that one out here, and notice how it looks like my knuckles are saved up until later in the downswing. Then I can go ahead and get them to release.

There we go, nice and solid, right to the middle of the green. Now, the second piece here is directly related to that.

The knuckles also help with this steep motion. So whenever I start down, if I feel like I’m very right side, right hand pushing on top, my elbow comes up and throws the club this way, that’s going to get me steep.

I want to feel like my hands go out and that actually allows the club to shallow. As I rotate my body, that’s going to bring my hands this way.

So if you’re too steep, you actually want to feel like you pair up that right wrist move with more out and letting the body start to rotate open this way. I don’t want to feel like I yank my hands straight down, or that’s going to kick the shaft in that direction.

The third and final piece is a really important one. What we want to do is we want to make sure the face isn’t wide open.

A lot of times players have never learned to square this face up. So what ends up happening is, you get rid of that cast, and you start getting some lag.

You start shallowing this club out and it’s from the inside, but look at this face, it’s wide open. As you come down to contact, as we look just like these pros are doing, my face is wide open there. You can see it’s going to go a mile to the right.

Now, the key there is to make sure that you learn how to square that face up. What I actually want you to feel is as you’re swinging down, I want you to feel like this club face is extremely shut. The face of the club is toward the ground.

That allows you to get into a position where you can lag it from the inside. You can really come in from well inside and as you rotate through, look how the face is now going to be square.

Now if you want to learn that, there’s a way that I recommend doing that’s easier than anything else. You’re going to The Move section of the Top Speed Golf System.

All you do is click the Instruction tab, click the Top Speed Golf System, then go to The Move. What I’m going to do there is I’m going to teach you to actually over-compress the ball.

I’m going to teach you the thing that every single pro player does. They over-compress it at times, and that ball comes out really, really hot. That’s what we’re going to do first.

Then once you get comfortable with it, we’re going to relax on that a little bit, and you’re going to have the perfect ball flight.

I want to give you what I call pro problems. I want to get you feeling the same things that the pros are having. I want that club to the inside, really closing, over-compressed, and then it will be easy to hit the ball nice and solid from there.

So, once you’ve finished this video, head over to The Move section and start working through that piece by piece. I want you to pay particular attention to the Tennis Racket Drill on there.

That’s what’s going to teach you this squaring up motion that I talked about. Once you get that down, it’s going to be a game-changer. A lot these things you’ve been fighting hard to get depend on that one move.

Best of luck, and I’ll see you in The Move section soon.

C111. The Right Way To Have A Consistent Golf SwingPublished: Feb 2nd Get Access Now! 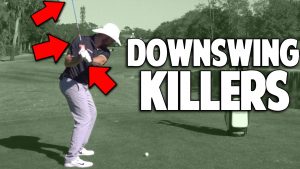