...it’s probably because you’re not creating and releasing lag at the right time.

Getting the timing right for these 2 things is crucial to your golf swing (and it’s what most get wrong).

Today, I’ll show you 2 of my best drills for building up and releasing lag (at the right time)…

...plus, you’ll discover how a ferris wheel can help boost your acceleration...

...so you’ll start blasting the ball farther than ever before!

Clay Ballard: The two drills that I’m about to show you are two of the best that I’ve ever come up with. Two of the best to help you create tons and tons of club head speed.

What you’re going to see every single player on the PGA Tour do, is they’re going to have this lag and this angle between their wrist and the club very late in the downswing.

When you pause their hands in front of the right leg, you’re going to see this club still almost parallel with the ground.

Then more importantly, they’re going to release that angle as they’re coming through contact and get this long position all the way through.

So when the arm is parallel to the ground kind of at the shoulder, this club is extending down the target line and really allowing that lag to release and snap on through there.

Now, most players that I see do the opposite of that. They get their lag in the backswing, they get tight up here, they get this really sharp angle at the top of the swing, and then it starts to cast and release as they start down.

When they get the hands in front of the right leg down here, the club is way down like that, instead of here like this.

Now, it’s that whip of the club coming through contact that allows you to do a lot of good stuff that’s happening right through impact area.

Number one, it’s going to help you to get that forward shaft lean, especially when you’re hitting your irons, you want the hands leaning in front. It’s going to give you consistency. It’s going to deloft the club so you get more ball speed.

You get all these great things that are happening. It’s also going to help you to make a consistent divot as you’re coming through impact. Like I said before, it’s going to help your speed to go way up.

So here’s how you do it. The first piece here is I’m going to make a really wide takeaway. I’m only going to go back to when my hands are about belt-high here.

You’ll notice that I haven’t really set the club very much. Both my arms are straight, and this club is parallel with the ground here, really wide away from my body.

Because I’m so wide, so late, what would be late in the downswing, I’m really forced to get that lag and that angle super, super late here.

Most players, again, they’re getting that angle up here, and then it’s going away. We’re trying to get that angle almost way down here at contact.

This drill forces you into really, really late lag in the golf swing. So I’m here, then as I open my body, that club starts to set there and I get that really good angle of late lag.

Then finally, I go ahead and I release that. Like I said, I want you to feel like this club is down this way. So if I let the club hinge back up, I’m flipping it, and it’s already hinged back up when my hand is kind of shoulder height.

I want you to feel like that club is down, it never hinges back up, and it releases long through contact. So that’s going to get you to not only get the shaft lean, get your body leading the way.

So when my right arm is parallel to the ground, I want that club extended all the way out like this.

Let me do one in slow motion here. Really wide on the backswing. As I open my body, I get these wrist angles. Then from there, I release like heck to this long finish.

Let me go a little bit faster now. It’s going to look like that. If you hit a shot doing this, it’s not going to go very far, but you’ll be surprised at how hot the ball comes off and how low it comes off, that’s from the forward shaft lean. That’s what the pros are doing.

So let’s go ahead and try one out here. Again, it’s not a drill to try to hit it far, yet. It’s trying to get you to come through impact correctly and really efficient, get that whip through contact.

There we go, nice little short iron there, or a short swing. I’m hitting that iron shot only about, probably three-quarters of the distance it would normally go.

So here, I have a 4 iron, this ball isn’t getting very high off the ground, and I’m really trying to feel like that lag is late in the swing here.

Now you’ll notice that I’m probably going a little farther back than I feel like. I’m giving you what you’ll feel like here, and it’s going to be a little bit longer when you actually make a swing.

Let’s try another one out. There we go, super, super low to the ground. You may even notice that it hooks a little bit. That one was really, really compressed there.

So that’s the first step to this. That’s going to teach you to get that lag and that club whipping through contact like the pros are doing.

Number two, we need to go ahead and lengthen that up a little bit. Nobody’s going to hit it very far, nobody’s going to create very much club head speed only swinging back to here.

What I need to do now, is feel like my hands go directly over my head. I want you to feel like your hands are a merry-go-round.

I want you to feel like your hands are on that Ferris wheel and they’re just straight up above your head like this.

Pair that up with this late lag and release long through the shot like I was just talking about there, and that’s when you can get some really, really good distances.

Again, I have a 4 iron here. You saw the last two didn’t go all that far, but this one’s going to really ramp up the speed here. Let’s try it out.

There we go, hit that one pretty good. I may not have the FlightScope lined up, I’m trying to miss a little bit left of the water there, but that was a pretty solid shot.

Look at the divot here, that dollar-bill-sized divot, that’s from me coming through contact the way I need to because of the first drill that I did there.

Now a lot of players that tell me you know, “Clay, I want to get those hands higher. I want to rotate more in the backswing. I understand that one of the fundamentals of the Top Speed Golf System is the Power Turn.”

Meaning that you’re going to rotate those shoulders, and really you just can’t hit it very far if you don’t do that. “But I just can’t do that in my swing. I feel too tight, I don’t feel like…I’m all out of whack when I try to rotate more.”

Really, a lot of that is training your hips and your body to work in the right way. Now a lot of players that I see, they may be doing the wrong motion like this with their hips, and they can’t go any farther than this in the backswing.

You’re going to find yourself, when you look on video, or you see yourself swing, you’re going to think, man, that was a lot freer than I thought it was. I didn’t know I could get in those positions.

That happens by working through these drills. So it’s really simple. Once you start to go through a few of those drills, you’re going to feel like you’re freer than ever.

That’s all there is to it. Just work through the drills, it’s going to happen for you. So finish this drill, and more specifically the one where you get that lag, that late lag, and you release on through.

Then from there, learn how to do that same thing getting this big turn. That’s really what all the best players in the world are doing.

The guys that are small guys, or aren’t that powerful, but they’re hitting it a heck of a long way and really solid at the same time. That’s what they’re doing.

So best of luck, head on over to The Power Turn section now, and I can’t wait to see you there. 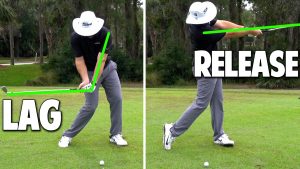