Why You Need This: In this video, "Why Not to Keep Your Head Down In Golf | Crazy Detail"...

You’ll finally discover what your head should be doing during the swing.

To start, there are tons of opinions on this subject.

And most of them are incorrect!

So if you’ve ever wondered...

Are you supposed to keep your head still throughout the swing?

Should you drop your head?

Good grief, who the heck knows what to do??!!

Then watch this video to find out if the most common advice such as...

(Hint, that advice is iffy at best.)

So in this video on why not to keep your head down in golf...

...you’ll discover why common advice tells us one thing all the while professional golfers are doing something else.

We‘re going to follow the FULL motion of the head throughout the golf swing!

...which in turn gives you strength, power, and more golf swing speed.

Hi guys, and welcome back. Now I get one of the most common of questions, I hear this one almost every single day, is what to do with the head?

Well if that’s the case, why do we always see the best ball strikers in the world, players like Rory McIlroy, Tiger Woods, Ben Hogan, why is their head dropping so much and moving around throughout the swing?

Well, it has to. If we want to play powerful golf, if we want to really compress the golf ball, the head’s got to move around a little bit.

In this video, I’m going to talk about an overview of exactly how the head should move in the golf swing and why we don’t want to keep it still.

All right, so at address let’s go ahead and start out here instead of being straight up and down, I’m going to be tilted slightly away from the target. It’s going to be a little bit of spine tilt, we talk about this in our Top Speed Golf System.

We want to have our spine tilted away about 6° or so would be a good amount, a little bit more or less is no problem. Then from there we’re going to be really nice and tall.

If you’re looking at me from this view, you’re going to see my chest is feeling like it’s kind of sticking out. My chin is nice and tall, and I have a nice high head.

Now as I go to the top of the backswing, because I’m rotating, we talk about in the power turn we want to get at least 90° if not a little bit more than 90° turn going back. As I rotate, my head is naturally going to start to turn a little bit to the right.

Your head will tilt to the right a couple of inches, completely normal. Shouldn’t worry about that at all, won’t be still.

As I go to the top, I’m also doing something with my legs, I’m actually letting my legs load up a little bit. So my right leg is starting to bend, my chest is moving down to the ground a little bit. That’s going to look something like this. I’m starting out really high again.

As I go to the top, my head’s going to start to load into the ground. As I start down, I’m actually coming down even a little bit more, that’s my chest working down to the ground. Vitally important for lag, this has to happen.

It’s very, very important as you’re starting down, my head’s dropping, my chest is dropping to the ground, my club is nice and shallow though, I don’t want to get that club coming over the top.

Now after I release this club into the straight line release, all that angle, all that whip is gone, now I can let my head come up nice and high and be over my front foot.

So again, let’s recap over this whole thing. I know it’s not one quick easy tip that you can take out to the course, but realize it’s OK to let your head move around a little bit. It’s going to move up and down slightly.

From address to the top of the backswing, to the maximum amount of the downswing, I want to see that head drop four or five inches in the best ball strikers in the world.

It’s going to be to the right as I hit the ball, and then it’s going to come back up nice and high. So I’m going to go through the entire motion. Standing nice and tall, a little bit of tilt away from the target. As I go to the top of the backswing, my head’s lowering, turning to the right.

As I start down, same thing, hips clear out of the way, body’s still tilted back so my head is kind of low and back. Then as I come on through, now my head is going to raise up and I’m facing that target.

So the head will move around, completely fine in the golf swing. If you can do that, it’s going to feel very free-flowing. You’re not trying to keep your head still.

If you do try to keep your head still, here’s the main thing I see happen. If I try to keep my head dead still, I have to kind of take my lower body out of the swing. I’m going to tend to do a little bit of this.

My hips slide to the right to try to get loaded up, and my head actually leans back a little bit this way, and then as I come down, I see people fall back and their head actually, the typical reverse pivot trying to keep it still and then falling back away from it.

So we want that head to move around a little bit, we want a good weight shift to the right. If we can do that, we’re going to hit the ball pretty dag-gone good. There we go, nice solid shot.

I let my head move around a little bit, you may not see quite as much up and down in mine as you do other players, that’s fine. I’m not saying that there has to be an exact amount that it moves, but the overall idea of letting it be a little bit free-flowing is going to be a good thing.

Good luck to you guys, work hard. I’ll see you all soon. 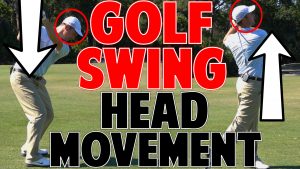