Why You Need This: In this video, you'll learn how to hit fairway bunker shots.

I bet you've been in this situation...

Your tee shot dribbles into a fairway bunker...

And your confidence takes it on the chin.

Well, next time you end up in a fairway bunker...

You're going to hit a clean, crisp shot to your target!

In this video, I'll show you the keys to getting out of the bunker with a clean shot.

Keep your chin and chest nice and high.

Concentrating on this will help prevent you from coming in too steep and chunking the ball.

That'll naturally allow you to pick the ball clean out of the sand.

Feel like you're taking the club more from the inside and shallow out your swing plane.

This is another way to prevent you from coming in too steep.

Watch this video now to learn the 3 keys for how to hit fairway bunker shots!

Hi guys, I bet you all found yourself in this situation. We’re in a bunker shot, we’re at a par 5, maybe hitting our second shot into the green. We’re ready to rip this thing, and we leave the ball in the bunker.

Cold, dead chunk. One of the most frustrating things that you can do. Well, in today’s video I’m going to talk about how we can hit those bunker shots nice and clean, and we’ve got a few keys that are really going to help you to do this. Let’s go ahead and get started.

All right, so the bunker shots. A couple key factors, and we’re really going to make this swing a lot like we would a normal shot. The importance here, and what I did on that first one that was incorrect, is as I set up to my ball I got too steep, I came down into the ball too much.

For those of you who struggle with a slice that happens a lot, you’re coming too steep and over the top, and then we end up hitting behind this ball.

So for those of you who are coming down over the top, sometimes your head starts digging down a little too much, and now I’m coming very steep into the sand, very easy for me to lay the sod over one, or lay the sand over top of the ball and it will only go 5 or 10 feet like that first one.

Now I’m going to keep my chin nice and high. Again, what I don’t want to do is catch a lot of sand. I want to pick that ball fairly clean out of there, but I don’t want to have to rely on my hands and arms to be able to do that. I want to let my natural instincts take over.

That’s naturally going to allow me to pick this ball a bit more clean as I’m coming through. Then lastly, for those of you who struggle coming in a bit over the top, bunker shots get really difficult, because my club is coming in very, very steep. I’m going to feel like I come a bit more to the inside.

So as I start to come in more from the inside, that’s going to shallow out my swing plane, and then I’m going to swing back to the inside again as I’m coming on through.

Number one, chin nice and high. I’m going to dig my feet in so I’ve got a nice, solid foundation. I’m going to choke up about a half inch on this club, and I’m going to feel like I come a little bit inside out to make sure that I come in nice and shallow with this ball.

I want to keep my head high all the way through the shot. There we go, right down the middle. Keep those things in mind, you guys are going to hit great bunker shots. 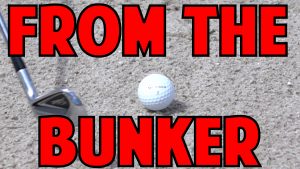