Why You Need This: In this video, you’ll get a great look at Rickie Fowler's swing consistency.

You’ll learn some of Rickie’s key consistency moves, and you’ll learn how to put these moves into your own swing.

Particular attention is given to the Stable & Fluid Spine.

In the Top Speed Golf System, this refers to how you keep your spine stable throughout the swing.

As you'll see in the video, Rickie does a really good job at keeping his spine angle stable.

Players that struggle to maintain this typically suffer from all sorts of mishits, from hitting it thin to hitting it fat.

The key is for you to avoid shifting your hips too much and swinging with a reverse pivot.

Next, you’ll see an analysis of Rickie’s spine angle at impact, which is the most crucial moment of the swing.

To make powerful contact, your spine angle should tilt back away from your target a bit, similar to the spine angle that you should have when you start the swing.

So think about it…

The best and easiest way to make consistent contact is to avoid big changes to your spine angle throughout the swing.

If you’re struggling to make consistent contact, then focus on maintaining a consistent spine angle.

And put his consistency moves in your own swing!

Are you tired of struggling, chunking shots, hitting them thin, slicing, you know, all kinds of different mishits, and you want to be more consistent as you go out to the golf course.

You want to be consistent from day to day, well we’re going to talk about how you can do that with what we call the Stable, Fluid Spin in our Top Speed Golf System.

We’re also going to talk about how to get a little extra power. If that sounds good to you? Let’s go ahead and get started.

The first thing we’ll mention here is what we call the Stable and Fluid Spine. Basically, as you set up your spine angle, this is the perfect angle to be looking from that, is going to be tilted slightly away from the target.

This is because your right hand is lower on the club, and also you want to be releasing the club out in front. As we go through the swing, we’re going to see with Rickie here is that this stays very consistent.

He’s not moving around all over the place. So as we go to the top of the swing, let’s say the very top of the swing is about right here, his overall spine angle may be increased a little bit more as he shifted to the right, but not a big change in the spine angle.

A lot of times what I’ll see is people will tilt their upper body back to the target, it’s often called a reverse pivo. The hips bump this way as the do this, and then their spine angle changes and looks something more like that.

Obviously, we don’t want that. That’s going to cause a lot of inconsistency as we start our downswing.

Now the most important piece of the Stable, Fluid Spine is where we’re going to be at contact. So now we can see as he comes down here and hits his ball, what angle is his spine in as he’s making contact?

The spine will be moving, but the overall shape and positioning of the spine is going to be nice and consistent.

This also tilts him away to where now he can release this club out in front of his body right here, and now we’re getting into what we call the Straight-Line Release, from all the way to the chest out to the club, that club face is releasing.

That club shaft is releasing, and his upper body, his spine is lined up in a way where that’s possible. If your spine isn’t in the right position, let’s say you’re tilted a little bit too much this way as you’re getting into this release position.

So really good representation of that here. We can also see what we call the compression line, which is the left shoulder socket, left hip socket, and left ankle.

So we’re going left ankle, left hip socket, left shoulder socket, those are all stacked up and slightly tilted away from the target.

If I draw a vertical line here again, we’re going to see that he’s angled back from that and again, that gets him to release into this Straight-Line Release position, create a whip out of that club, and get a lot of speed as he’s doing that.

Lastly, as he comes through here to the full finish, you’ll notice that as he’s coming on around, his spine is still angled slightly back away from the target. So very, very consistent from start to finish. Great looking swing.

One last key for you guys, as you’re going out and working on this, a great drill that I like to think of is to keep your nose – if we’re looking from the front – the nose in front of your belt buckle.

So his belt buckle would be up here if we’re looking at the front view, keep your nose a little bit behind that. That’s going to get you in a great position as you’re starting out.

If you want to get that distance like we talked about, let’s go ahead and talk about one more thing that we mentioned in his last swing review that we did.

As he’s coming halfway down, tons of lag here, another great thing he’s doing in his swing, tons and tons of lag. Look at the angle of his lead leg. We talked about this in his last swing review, how this is angled away.

Now as he goes into contact, that is going to drive force down into the ground with his left ankle. Because his left femur, his left upper leg is angled away like this, watch what happens to his hip socket.

His hip socket is right here, watch what happens as he comes in to contact. It rotates open and moves up slightly, because his femur is angled in that position.

So as he drives force into the ground, that’s moving the left shoulder, the left hip, back up and away which allows him to release the club down and away, an opposing force.

We’ve heard of ground force reaction, or we’ve heard of Newton’s Third Law, every action has an equal and opposite reaction, that’s how this works to create tons of speed.

We definitely go over this in the Top Speed Golf System, which allows you to work through that.

All right, for those of you that are members that are joining us today, I’ve got two videos that I’d like for you to watch, video 2.1 and 2.2 in The Stable, Fluid Spine section.

We build on the nose behind your belt buckle idea, and we talk about how to do that throughout the entire swing. I build on that concept and go through the entire thing for you.

If you’re a member, check out both those videos. It’s going to help you to build that stable spine, to get consistent, and to start playing a lot better golf.

So good luck to you guys, I’ll see you all soon. 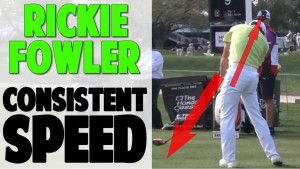