Why You Need This: In this video, you'll learn how to use your right leg in the golf swing.

The video goes into crazy detail so you'll know exactly what's happening with your right leg in the swing.

He's a perfect model to show you how your right leg works in your swing.

First, you'll learn about the stance.

Wider than shoulder width is about right.

This makes for a stable setup for your swing.

In the backswing, you'll see how you should push into the ground with your right leg.

This helps your hips and shoulders rotate in the backswing.

Make sure you don't lose the flex in your right leg; you want to be nice and loaded.

In the downswing, the right knee moves forward as you shift your weight forward and start to open up your hips.

Near impact, your right leg straightens just a bit as your hips continue to open up.

Another move to watch is when the right heel starts to come off the ground.

As Adam Scott shows, the heel comes up as the hips and right knee rotate open in the downswing.

Important note for this video:

Try not to obsess over every tiny detail of the right leg.

You don't have to swing exactly like Adam Scott to have a good swing!

However, if there's a move in your right leg that's just way off from what you see in the video...

...focus on correcting that move.

Watch this video now to see how to use your right leg in the golf swing.

You'll get a very detailed analysis of Adam Scott's right leg to see what you should be working towards!

We’re going to go into some crazy detail, more detail than you’ve probably ever seen before on the right leg and how it works in the golf swing.

We’re going to take Adam Scott here, fantastic player. One of the best swings of all time, perfect model to talk about how to use the right leg.

Let’s start out by talking about just the overall setup. He’s going to be setting up here with a long iron on the right, and the stance is going to be a little bit wider than shoulder width apart.

I like that a lot, because that gives you enough base, enough power to feel athletic, to feel like you can get some power into the swing, and then it also allows you to be narrow enough to rotate. We don’t want to get so wide that we can’t move our body very well.

Now in the backswing, what’s going to happen is he’s going to be pushing down and out this direction. Because of that, we probably all heard this, it’s kind of a cliché saying, but Newton’s Law for every action there’s an equal and opposite reaction.

It’s definitely true, this is what you’ll hear people talk about ground force reaction sometimes, it’s a big complicated way of saying you need to push down and out this direction, and the ground is going to push back up into you that direction.

So again, pushing down and out kind of this direction with the right foot in the backswing, that’s going to rotate the body open. So the harder you push with that right leg, the more the hips and the shoulders are going to rotate.

If we’re looking at it from the down the line view, we’re going to see the exact same thing, pushing into the ground, hips rotated, shoulders rotated. There’s the top of the swing.

We want to push into the ground, we want to rotate, but we don’t want t lose all the flex in our right leg. That’s going to be nice and loaded.

At the top of the swing, knee is pointing back to the right. You can see that there is a laser shooting out of the knee, it’d be about right here. As he gets about halfway down right there, now that knee’s going to start to go a little bit more in front. It’s feeling like it’s going this way.

Not quite to the extreme that I’m putting, but that’s again, this is a feeling that I’m talking about here to get that knee to rotate inward.

The same thing if we look at that same position from the down the line view, now we can see right there would be the same spot, and that’s starting to feel like it’s pointing more here.

Now from there, this is what I call our max lag position. So our club and our forearms have the sharpest angle of lag that they’re going to have in the swing. From here, everything’s releasing.

So right there at contact, we can see that it rotated forward, still got some bend in it, for sure. But it’s rotating and straightening very slightly. As we come through even farther, we’re going to notice that it’s getting even more straight as we’re coming through there.

It’s not a big push off the right side, but naturally because the hips are rotating, it’s going to get a little bit straighter as it comes on through. If you’re looking at the full finish here, now we can see that the right leg has rotated all the way around, and it’s fairly straight.

It’s not that we pushed super hard with the right leg and jammed the right leg straight, but we’re letting it rotate on through and as it does that, it’s going to straighten up a little bit slightly.

Then as we finish – sorry, this video doesn’t go all the way to the end, but we can see if we get to the last frame that this one will show, that we’re going to start to see the spikes on the bottom of the right shoe will start to rotate up, and that’s allowing the hips to come all the way on around.

If we look at it from the face-on view, we’re going to see very clearly that the right shoe has rotated all the way on around. We get all the way to the good finish position.

If you’re looking at the spikes on his shoe, they would be facing to the person that’s standing directly behind you, and that right hip socket is facing all the way toward the target.

That’s the right leg and some really good detail. Follow those keys. If something sticks out in your swing that’s very far off of that, I would recommend working on that right leg. Really let it to rotate through.

A lot of times what I see people doing is instead of letting this right leg start to rotate on around, they’ll feel like they pause the knee, have it facing the ball, and then it never goes any farther forward.

So good luck to you guys, I’ll see you all soon.

All right guys, for those of you that are members of the website, I highly recommend working on the Power Turn. Working on these hips going rotating back in the backswing, and then on the follow through, keying in on the hips facing the target.

In the Power Turn section, I break that down for you step by step, and if you start from level 1, start working through those videos in order, you’re going to build up a really good turn.

That right leg is going to start to work better, and it all comes down to just following the drills in each level, in each section, and it’s going to build it without having to worry about all these fine-tuned details. I’m going to tell you exactly what to do.

All you have to do is just watch the video, go out and do the drills, and you’re going to be playing better. Your legs, your hips, everything’s going to be working better.

Go ahead and start right now by going to the Power Turn section. Click on video 1.1 and start working your way through the videos today. Good luck, and I’ll see you all soon. 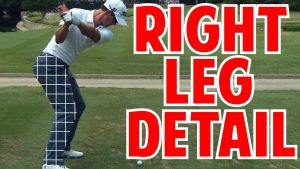