I used to use the golf impact bag all of the time with students. I liked how it would slow them down and give a great sensation at contact.

I also notice how it could cause golfers to get the wrong idea of the golf release.

If we are focused on the bag, we will often try to release at the bag. When in reality, we should be releasing well in front of the bag and letting contact get in the way of a good swing.

Luckily, there is a great way to kill two birds with one stone if we use the impact bag correctly.

What's Covered: How to correctly use the impact bag to get compression of the ball.

Hi guys, welcome back, great to have you here today.

In today’s video I’m going to let you in on a little secret.

There’s a drill that I used to do a lot, and I used to work on with a lot of students that I think was dead wrong.

And I want to make sure that you guys know the drill that I’m talking about, how it can hurt your golf game, and then we’re also going to talk about how you can do this properly using the same training device, that’s with the impact bag.

I used to work a lot with the impact bag and talk about releasing the club at impact.

And we talked a lot about getting the speed of the club to really snap through impact, and really release as you’re coming through impact to get all that speed at the golf ball.

You know it makes a lot of sense, we’re hitting the golf ball, we want the club to have the maximum amount of speed at the golf ball.

When I looked at all the best golfers in the world, they’re all releasing the club, and we’ll call the release as I have angles in my forearm, and my body, and everything is not synched up.

When the club releases is when these angles are gone, the club’s splitting my forearms. My hips, my shoulders, everything is releasing into the same point, and all those angles, I have gotten rid of all those angles to create the maximum amount of speed.

That’s usually happening about 45° after impact.

As a result, we’re not going to have as much forward shaft lean, we’re going to be a little tighter through impact, we’re going to feel like we’re in a rush in the downswing, and I think it can cause a lot of damage.

So in today’s video I’m going to talk about what we can do, a great way to use this impact bag.

Instead of trying to release at the bag here at impact, another way we can use this impact bag to feel the release of the arms, and to feel everything releasing out in front.

Let’s go ahead and do this, as we set up, actually let me grab a golf ball real quick, and then we’ll do this drill.

As we set up to this golf ball, I’m going to go ahead and take my sense.

And now from here I’m just going to move the golf ball away, just so I have kind of a general idea of where it would be if I’m going to hit the golf ball, and now as I’m coming into impact, I want to feel like my wrist haven’t been releasing yet.

I’ve still got forward shaft lean, I would have compression on the golf ball, and then everything is going to release towards this bag which is about four feet in front.

That’s going to be about your release point with most of your clubs, so there we are, four feet in front.

I’m going to do a couple repetitions, just slow motion going form full lag, going through contact really, really nice and slow, and focusing on releasing everything in a straight line as I get to that bag.

I’m going to do about 100 of these repetitions, just really feeling that nice and slow.

As I’m starting down I’m letting my weight go to my left, clearing my hips out of the way, getting the wrist angle and I’m only focusing here on fully releasing into that bag.

As a result, because my hands are leading the way, I’m naturally going to have some forward shaft lean, and I’m focused on this bag.

After I do about 100 repetitions doing this, that’s when it’s OK to bring the bag back in.

So now I’m still pretending the bag is out here, I still have that visualization I just worked on in those drills.

Now I’m going to swing to that imaginary bag out in front, and I’m just going to let this bag get in the way.

I’m visualizing this bag up here, and as I swing I’m going to have forward shaft lean there.

Really slow, releasing to that bag out in front so everything’s pointing to the bag, hips, shoulders, arms, hands, club.

Do a few of those, and then I’m going to move that bag out in front again.

There we go, we can see as I do this, look how much forward shaft lean I have. Look how everything’s moving through the bag.

I don’t have to feel like I’m hitting at the bag, I feel like I’m swinging through the bag and it’s simply getting in the way of my swing.

So we can go ahead and do those back and forth. Once we’ve got a few repetitions with that, you can do as many as you want to, but I want you to go back and forth.

That’s going to help you build a lot of forward shaft lean, but the key here is I’m simply swinging through the bag, letting it happen, and I’m not trying to flip and release at the bag.

That can help you get more compression, for forward shaft lean, and to really start hitting those crisp, solid iron shots. 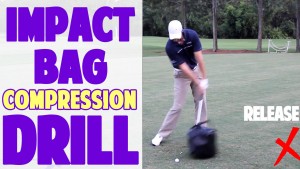